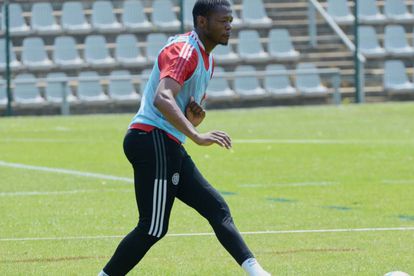 Mabena returns to the place he called home between 2009 and 2014 before going on to play for Platinum Stars, Bloemfontein Celtic and then recently Royal AM. The 35-year-old joins the Buccaneers on a one and a half season deal.

Speaking exclusively on Sports Night Amplified, Mabena has detailed how he went unpaid at Royal AM after an exchange deal with Swallows went awry.

“It was not professionally done, and that’s when the fighting started. I had to win all the cases because I went for months without getting paid, it was not nice,” said Mabena, as quoted by SABC Sport.

“But mentally I was ready and strong, with all the support I was getting from the family and now I have a contract with the Black and White (of Pirates).”

Mabena reiterated how grateful he was for another opportunity with Pirates after his contract dispute with Royal AM.

“I refused to go to Swallows, I had not seen any documents. Then I was stopped from entering the training premises (at Royal AM) because I am not their player. I was chased away….

“With all that was happening with me and Royal AM, we had to go through a lot. But the chairman (Irvin Khoza) opted to take me back and he said to get a contract here I must give him my clearance and see how we work it out.

ALSO READ | COULD THERE STILL BE A TWIST IN CHIEFS’ PURSUIT OF FLEURS?

The DStv Premiership has been on a mid-season break as the FIFA World Cup has been playing out in Qatar, but local league action will soon get back under way. As it stands, Sundowns, Richards Bay, SuperSport United, Chiefs and Pirates occupy the top five spots on the league log.

Teams have already begun to return to training as preparation begins for an incredibly busy set of fixtures heading into the new year.

Here are the fixtures you can look forward to at the end of December:

HERE’S A REMINDER WHERE THE LIKES OF CHIEFS, PIRATES AND SUNDOWNS SIT IN THE TOP HALF OF THE LOG:

Viral Video: Shocking footage of severed head of fish turns out to be alive

Arthur Zwane: I don’t like players who drink and smoke