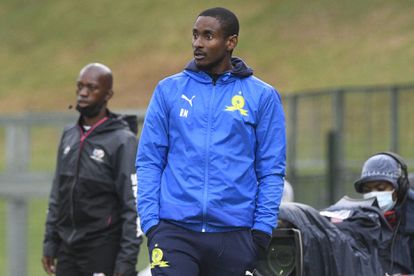 The final domestic trophy is up for grabs this evening when Mamelodi Sundowns and Marumo Gallants clash in the Nedbank Cup final!

Mamelodi Sundowns have already secured thekr spot in the CAF Champions League after winning the league meaning Marumo Gallants by default have already qualified for the CAF Confederation Cup whether they win tonight or finish as runners-up.

The Brazilians will be desperate to complete an incredible domestic treble this evening. They opened their campaign with a triumph in the MTN8 before lifting the DStv Premiership title in lighting quick time.

Nedbank Cup: How to LIVE STREAM Sundowns vs Gallants for FREE

We have to respect Gallants – Kutumela!

“What we have to do is to respect Marumo Gallants.” Thabiso Kutumela told the Mamelodi Sundowns website.

“We can’t undermine them even though they haven’t managed to make it into the top 8 in the league.

“They’ve had a good season and were consistent in the Nedbank Cup. They are not here by luck, they’ve worked hard.

“Mamelodi Sundowns have to respect them in order to win our game and take our chances.

“The goals I’ve scored so far in this tournament are a result of me wanting to earn a spot to play in the final.

“My goal is to score and create so that we can win this tournament. In the final, there has to be a winner.

“I’m ready to do whatever it takes to help Mamelodi Sundowns win this game so that we can win our third trophy this season and complete the domestic treble.”