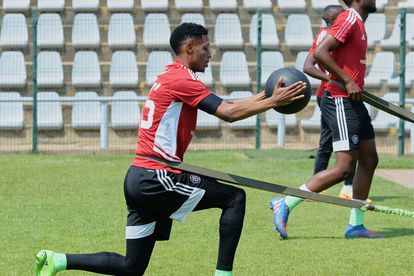 Orlando Pirates have welcomed back some crucial players from injury and suspension ahead of their MTN8 semi-final first-leg clash with Mamelodi Sundowns.

The Buccaneers have the midfielder Goodman Mosele back from suspension after he received a red card in the quarter-finals against Royal AM.

The player will have gotten some much-needed minutes under the belt when he turned out for Bafana Bafana during the FIFA international break.

On the injury front, the Sea Robbers could be welcoming a number of their stars back into the match-day squad, with the likes of Vincent Pule, Terrence Dzvukamanja and Thabiso Monyane all having been training lately after being sidelined in recent weeks.

NDLONDLO AND ERASMUS FOR DEBUTS?

According to the club’s website, Evidence Makgopa is also nearing his Bucs debut having made significant progress in recovering from an ankle injury.

The match will be played in front of a sold out crowd at the Orlando Stadium with kick-off set for 15:30.

In the other MTN8 semi-final first-leg tie this weekend, Kaizer Chiefs will be up against AmaZulu at the FNB Stadium on Sunday at 15:30.