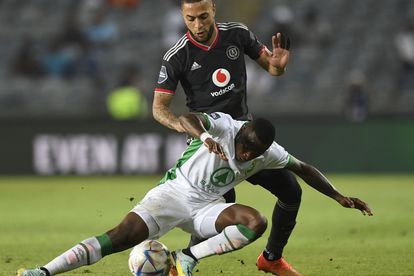 Pirates, who were high on confidence prior to the derby after beating Mamelodi Sundowns in the MTN8 semi-finals, somewhat surprisingly lost 1-0 to Kaizer Chiefs who have been struggling recently.

The 32-year-old was a notable missing link in the Buccaneers’ line-up considering his impact in the team in the past few games in taking care of the dirty work.

His ability to intercept the opposition’s play and free the likes of Ndabayithethwa Ndlondlo to attack was notably absent.

“Of course, you want to play in it [Soweto derby], everyone wants to be involved but I know myself, I’m a team player,” Timm told KickOff.

“[On his last yellow card] I’ll always protect my teammates as a bigger brother, so I’m never going to stop that [being protective].

“Getting cautioned, well…it’s part of the game and I’m confident in all my teammates.”

The return of the former Marumo Gallants midfielder will be a major boost for coach Jose Riveiro when he selects his team for the MTN8 final where they will take on AmaZulu on Saturday, 5 November.

The match at the Moses Mabhida Stadium will kick off at 18:00.