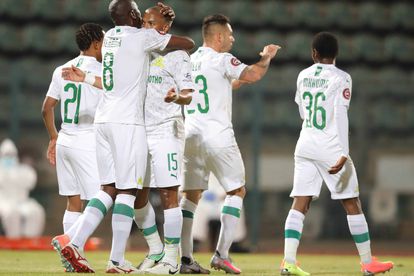 Mamelodi Sundowns stuttered again in their chase for a third successive PSL title, as they were held to a 2-2 draw by Maritzburg United at Lucas Moripe Stadium on Friday.

The defending league champions finished the game with ten men after Ricardo Nascimento was given his marching orders in the second half.

The Tshwane giants, back in their backyard as the away team this time, began as the more dominant of the two sides, with captain Hlompho Kekana, Promise Mkhuma and Nascimento all getting shots at goal.

It was the skipper who edged them ahead in the 24th minute after being set up by Gaston Sirino.

Watch Hlompho Kekana open the scoring in video below

The lead lasted just six minutes, with Rushine de Reuck pouncing on some lazy defending to shoot at an empty net for the equaliser.

The second half began in horror for the hosts, who conceded a penalty after Nazeer Allie was adjudged to have handled the ball inside the box in the 49th minute.

Nascimento calmly slotted the resulting penalty, with his shot too powerful for the diving Richard Ofori.

Watch Sundowns take the lead through Nascimento in video below

Like they did in the first half, United equalised within ten minutes of going behind, as Thabiso Kutumela shot outside the box for a stunning goal to make it 2-2.

Nascimento, who had earned himself a yellow earlier, was penalised for a rash challenge, and shown his second card of the night, ending his night prematurely.

Watch Nascimento earns a red card in video below

That was the last action of the night, as Sundowns failed to make a considerable dent between themselves and Kaizer Chiefs at the top of the table.

Kutumela, whose blinder drew United level was named Man of the Match.

United will welcome the points, which consolidates their spot in the top eight.

Our live updates will appear below; they might take longer to load on slower connections. Please refresh your browser if updates are delayed or interrupted.