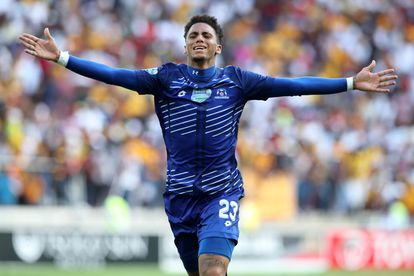 Maritzburg United have denied claims that they are set to part ways with two players who have been central to their success this season.

Goalkeeper Richard Ofori and star defender Rushine de Reuck have been two of the Team of Choice’s star players, helping them back to the top half of the table after surviving relegation the previous campaign.

The Ghanaian shot-stopper has long been linked with a move to Soweto giants Orlando Pirates, and such rumours gathered steam in the past week with reports suggesting that he was due to leave the KwaZulu-Natal outfit for the Buccaneers.

According to The Citizen, Ofori is one of three Maritzburg players the Buccaneers have been working to lure, the others being the 24-year-old defender and striker Judas Moseamedi.

Maritzburg came out firing on Thursday afternoon, refuting claims that Ofori and De Reuck are on their way out of Pietermaritzburg.

Pirates and Maritzburg have done some business in the past, most recently the loan transfer of defender Tebogo Tlolane, who is already featuring prominently for the men in blue after not making an appearance for the Sea Robbers.

Another player to move from Soweto to the KZN Midlands is Thabiso Kutumela, whose recent form has earned him a Bafana call-up, while midfielder Fortune Makaringe went the opposite direction and has been a star in Pirates colours.

The Citizen has also suggested that the Buccaneers are using out-of-favour goalkeeper Siyabonga Mpontshane to sweeten the deal for the trio.

Another club strongly linked with the players is defending league champions Mamelodi Sundowns.

Some fuel was added to the fire when coach Pitso Mosimane revealed that the club – who have secured the services of Kaizer Chiefs’ George Maluleka on a pre-contract – have signed three players for the season ahead.

“Not only are these stories completely unsubstantiated and false, but they are unsettling to the two players, their teammates, the coaching staff, club management, the supporters and everyone involved with the KwaZulu-Natal Capital City club,” the Maritzburg United statement continues.

Maritzburg United are currently fifth on the log standings after recording four straight wins, equaling a near-two decade club record for their longest winning streak in the top flight.

They travel to Thohoyandou for their next fixture, where they will face the struggling Black Leopards on Saturday, 21 March.