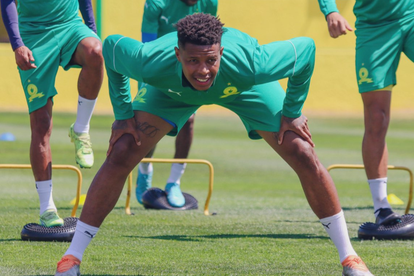 Mamelodi Sundowns co-coach Manqoba Mngqithi believes the versatility of Bongani Zungu will offer them more than one option in midfield.

‘Ben 10’ featured for the second time for Masandawana this season when he came on in the second half during their MTN8 semi-final first-leg against Orlando Pirates on Saturday.

Mngqithi says they can utilise him as number eight (central midfielder) or 10 (attacking midfielder).

MNGQITHI ON HOW THEY WILL UTILISE ZUNGU

“When we got him first from Tuks, he was playing as a ten and as an eight, you remember he was playing with Mame Niang at Tuks,” he told the media as quoted by Soccer Laduma.

“As an eight, he did very well for us, even before. I think he still has a lot to offer in a more advanced position because he’s got a goal. He’s got a shot, he’s got a header, he’s strong on set-pieces and he’s a very good passer that is well weight.”

ALSO READ: KEAGAN DOLLY ON WHAT KAIZER CHIEFS HAVE BEEN STRUGGLING WITH THIS SEASON

Mngithi also revealed that they have also tested a combination of Zungu and a defensive midfielder Rivaldo Coetzee in a friendly match with Botswana’s Township Rollers.

He went on to hail the former Amiens star’s impact against the Buccaneers.

“He [Zungu] has improved tremendously in terms of his fitness, considering where he is coming from, we had a friendly game against Township Rollers immediately after our game against AmaZulu,” he added.

“And he had a very good performance together with Rivaldo Coetzee, they had some top performance, which is why we considered a possibility of him helping us in this match [against Orlando Pirates].

“There was a lot of verticality in his passing game, that was very important for us. How many times did he find [Aubrey] Modiba, how many times he found ‘Tebza’ [Teboho Mokoena] and ‘Mshishi’ in a very critical positions and that is what we wanted.

“More than anything else we wanted to increase the speed of the passing game, the interval between the passing and receiving first half was very slow and that was a little bit irritating for us.”

ALSO READ: DSTV PREMIERSHIP IS BACK! ALL THE MID-WEEK FIXTURES