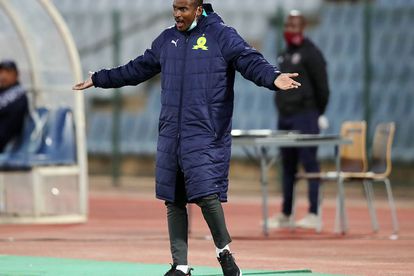 The long wait is over! Mamelodi Sundowns and Cape Town get the 2022/23 DStv Premiership campaign underway this evening!

The defending champions take on last season’s runners up at the DHL Stadium in Cape Town at 19:30 (SAST)

Both teams will be desperate to get a massive season which includes continental football underway on a positive note this evening.

Take a look at how you can live stream tonight’s blockbuster clash.

How to LIVE STREAM Mamelodi Sundowns vs Cape Town City!

Action between Cape Town City and Mamelodi Sundowns gets underway at 19:30.

The match will be televised live on SuperSport PSL.

This is the toughest match of the season – Manqoba

“That match is probably one of the toughest games we can anticipate.” Mamelodi Sundowns coach Manqoba Mnqgithi told Sowetan.

“Cape Town City have been growing in leaps and bounds since last season. In terms of the KPI they were probably supposed to be number two if not number three.

“So that already suggests that they deserve to be where they are. The team that could have easily been where they are was [Orlando] Pirates.

“But unfortunately, they did not score the goals that they anticipated.

“If you look at the performance of Orlando Pirates and Cape Town City, even Mamelodi Sundowns, you will see that Pirates deserved to be probably in a higher position than that.

But Cape Town City were looking very good and were progressing very well as the season continued.”

Newspaper front pages from around the world, 06 October 2022