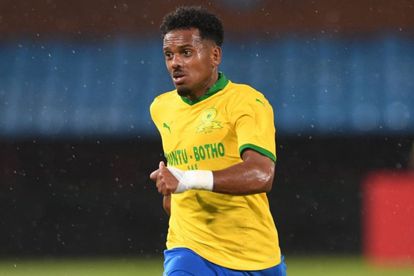 Mamelodi Sundowns striker Kermit Erasmus is reportedly “unhappy” at his lack of game time and might be loaned back to his previous club Cape Town City.

Erasmus hasn’t lived up to expectations at Masandawana since they signed him in 2020, but to be fair injuries have played a big part in his limited appearances.

With Peter Shalulile owning the number nine position, it has made it even harder for the 32-year-old Erasmus to find a spot in the first team line-up at Chloorkop.

According to Phakaaathi, the Pretoria club is considering loaning the Port Elizabeth-born striker back to the Citizens.

“Mamelodi Sundowns are expected to make a decision on Kermit Erasmus, who is understood to no longer be happy with the club because of the lack of game time,” Phakaaathi reported.

“Erasmus could go out on loan back to Cape Town City, who are currently struggling to score goals, according to a source.”

It is believed that there are some other clubs who have shown interest in the former Stade Rennais forward, but he’s opting for the Citizens.

“The case of Romeo (Erasmus) is not too complicated. He wants to play and coaches cannot guarantee him that,” said a source.

“There are a few clubs who have shown interest in the 32-year-old, but his heart is in the Mother City.”

PSG coach apologises for joke made in ‘bad taste’

Heist kingpin killed in a hail of bullets [video]