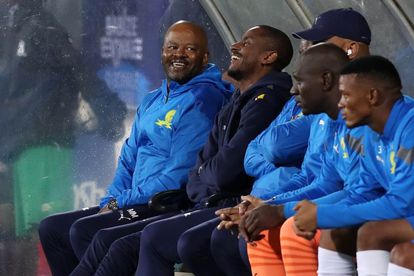 Mamelodi Sundowns head coach Rhulani Mokwena has reminisced the Qatar trip he took with his colleagues in the first five days of the FIFA World Cup.

The entire Sundowns technical team attended the World Cup to equip themselves with knowledge, and they included both Steve Komphela and Manqoba Mngqithi.

According to Mokwena, they managed to watch 17 World Cup games in the five days they spent in Qatar.

And that’s four games a day, and as demanding as it was, Mokwena feels the exercise was worth it.

Furthermore, Mokwena said this trip to Qatar helped them to bond as coaches, especially on the back of the changes that the Sundowns management made when he took over as head coach.

Mokwena also thanked Sundowns technical director Flemming Berg for ensuring that they meet a few coaches during their stay in Qatar using his contacts.

“We got an opportunity to watch 17 games in five days, which is something that was difficult to do in attending four matches a day. But it is something that I and the rest of the technical team, coaches Manqoba and Steve and others, were able to do even though it was very difficult,” said Mokwena as per Sowetan.

“But we were able to get it done and as difficult as it was… a lot of travelling, a lot of walking long distances because we were trying to win over time between the games,” he added.

“But we managed to do it by encouraging each other through the days and it also gave us an opportunity to build our own chemistry which helps to formulate the dynamics and know each other better off the pitch.”

“From the educational perspective, it was very good. We met the coach of the USA [Gregg Berhalter], and we were privileged enough to experience this thing, and also thanks to [Downs’ sporting director] Flemming Berg for organising these things using his contacts to be able to help us meet some of the coaches. To summarise the trip, it was a great success,” concluded Mokwena.

DStv Premiership: ALL 10 teams in action on Friday, 30 December