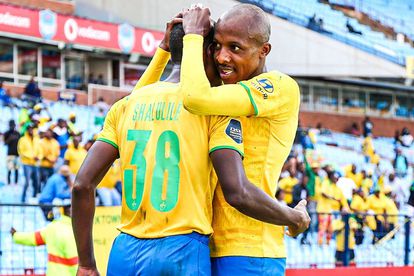 Mudau has arguably been one of the most improved South African footballers over the last 12 months.

Mudau joined the Brazilians from Black Leopards in 2020 before fast-becoming the number one right-back in the country.

He’s set to be rewarded for his performances with a bumper new deal at Mamelodi Sundowns!

According to FarPost, the DStv Premiership Champions are preparing a bumper new deal for their star defender.

In other news, the Brazilians look set to bolster their already impressive squad ahead of next season!

Mamelodi Sundowns, who are expected to focus on the Caf Champions League next season, have reportedly reached an agreement to sign a 24-year-old star.

Sundowns have agreed a deal with Morocco’s SCC Mohammedia over the signing of Abdelmounaim Boutouil according to reports.

Boutouil is a highly rated center-back and is expected to fit into the Mamelodi Sundowns side like a glove.

However, as they’ll know from last season, a rock-solid ball playing defender like Boutouil will help them greatly on the continent.

According to Unplayable, the Brazilians have secured the services of a top quality defender on a long-term deal.

The club are expected to be made official in the coming days.

The Brazilians have been relatively quiet during the current transfer window.

The league champions are expected to announce the arrival of Ethiopia sensation Abubeker Nassir as well.

Abdelmounaim Boutouil is valued at Over R7 million according to Transfermarkt.