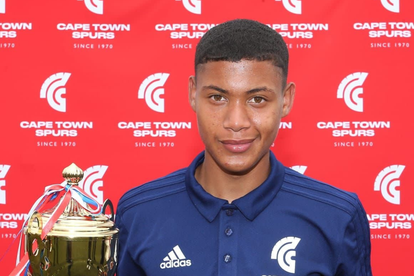 Tipped to be a Bafana Bafana superstar. Image: @Siyavumasports / Twitter

Tipped to be a Bafana Bafana superstar. Image: @Siyavumasports / Twitter

Many of you may have heard of what is rated as the best U19 football tournament in South Africa, the Bayhill Premier Cup. This is where Cape Town Spurs have unleashed their newest special talent during Easter.

According to the report, Abrahams, who terrorised opposition defenders with sublime skill and will, caught the interest of Ka Bo Yellow scouts as Spurs marched to lift the title.

“Faiz Abrahams, 17, impressed for eventual winners Cape Town Spurs and is understood to be on ‘Downs’ radar, although the tournament was watched by agents and top scouts from all over the country,” Soccer Laduma said in their latest issue.

“Soccer Laduma understands that there will be no rush to take any decision on the winger’s future given that he has done well in the development structure and was recently allowed to train with the senior side currently campaigning in the GladAfrica Championship.

“According to some of the agents and scouts who were at the Bayhill Premier Cup and watched Abrahams help Spurs to the title, there was a lot of talk about the wide player and his situation at the Mother City outfit,” the report added.

KAIZER CHIEFS TARGET DORTELY TO BE LOST TO EUROPE?

In a related update, Kaizer Chiefs are also targeting a player at Spurs. His name is Rushwin Dortley and is rated as a top 19-year-old central defender who uses his left foot.

As The South African previously reported, Amakhosi went as far as starting formal talks with the Cape club.

But things change rather quickly in football. The youngster may be going to Europe instead.

“Both sides were keen to conclude the deal for the 19-year-old as quickly as possible,” a new report said. Read the full story here.