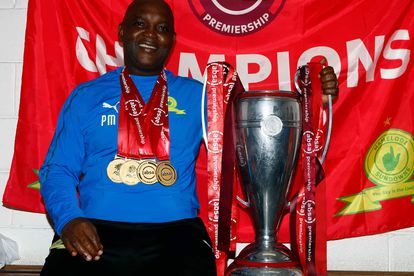 BETHLEHEM, SOUTH AFRICA – MAY 11: during the Absa Premiership match between Free State Stars and Mamelodi Sundowns at Goble Park on May 11, 2019 in Goble Park in Bethlehem, South Africa. (Photo by Steve Haag/Gallo Images)

BETHLEHEM, SOUTH AFRICA – MAY 11: during the Absa Premiership match between Free State Stars and Mamelodi Sundowns at Goble Park on May 11, 2019 in Goble Park in Bethlehem, South Africa. (Photo by Steve Haag/Gallo Images)

One of the greatest African coaches of the modern era may soon walk away from Mamelodi Sundowns. Reports on Sunday have suggested that the Brazilians’ boss Pitso Mosimane is fed-up with his position at the Tshwane-based club, and circumstances behind-the-scenes are making him consider his future.

The extraordinary claims have surfaced after a week where Mosimane was missing from pre-season tours to Botswana and Zambia respectively. He did, however, show up one day later for the Zambian leg of their preparations. The South African champions kick-off their season in five days’ time.

The new PSL season gets underway on Saturday, with Masandawana entertaining their fierce city rivals SuperSport United. But there is tension in the air, and uncertainty is threatening to cloud the outlook for Mamelodi Sundowns. But what are the factors that are allegedly getting to Pitso Mosimane? Let’s take a quick look.

Introduction of a technical director at Mamelodi Sundowns

Like any coach worth his salt, Pitso is a little bit miffed that there may be some interference with the way he does his job. TimesLive reports that an “unnamed Spanish coach” was given a tour of Sundowns’ training facilities this month, and he would act as a liaison between owner Patrice Motsepe and Pitso – something that has irked the manager.

Clashes with operations and logistics

A few whispers on the grapevine are suggesting that Mosimane has had an almighty fallout with Club Chief Financial Officer (CFO) Amanda Matthee. It’s understood he is upset with the executive, who has allegedly undermined his Champions League preparations by refusing to book direct flights and better facilities for the team.

Pitso Mosimane has issues with Cedric Moela and Alex Shakoane

As Sunday World ran with this weekend, club executive Alex Shakoane led a campaign to employ former supporters’ club office bearer Cedric Moela. But Mosimane is well aware of accusations that Moela led the “Pitso Must Go” movement, which influenced some fans to withdraw their support for the boss. Mosimane is allegedly fuming with all parties.