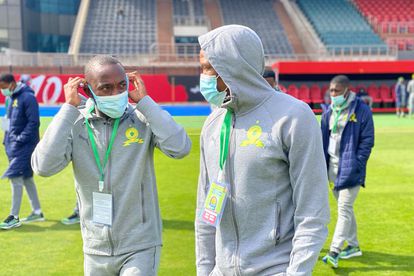 Mamelodi Sundowns continue their quest for CAF Champions League glory away to Al-Merrikh at the Al Salam Stadium in Egypt on Saturday. Photo: Twitter @Masandawana

Mamelodi Sundowns continue their quest for CAF Champions League glory away to Al-Merrikh at the Al Salam Stadium in Egypt on Saturday. Photo: Twitter @Masandawana

Mamelodi Sundowns walked away with a 1-0 victory thanks to a Thapelo Morena strike. Up next for the Brazilians are a stubborn TS Galaxy side.

Galaxy have won two out of their last three matches including a shock victory over the mighty Kaizer Chiefs!

Manqoba opens up on deadly tactics

“We had to drag the game a bit and make sure they didn’t get an early goal because we knew as the game progressed they might tire,” Mamelodi Sundowns co-coach Manqoba Mngqithi said.

“We anticipated what they might bring. We were confident the team we have has the capacity because we were still unhappy with what happened last year, because even last year we believed we deserved to win.

“Our plan was to always try to defend from zone two [in the attacking third] so we minimised the space behind the Mamelodi Sundowns defence and were able to close the pockets and the half spaces.

Because we knew, especially when they brought on Al Shahat and ‘Afsha, they were going to be using those half spaces and pockets.

“We had to make sure we dropped a bit but still put a lot of pressure on the ball, which I think we did very well. There were a few scary moments but I think the game plan worked.”

Action at the Mbombela Stadium gets underway at 19:30. The match will be televised live on SuperSport PSL.

Banyana Banyana vs Morocco: How to watch LIVE on TV!

One killed during shootout with police in foiled truck hijacking