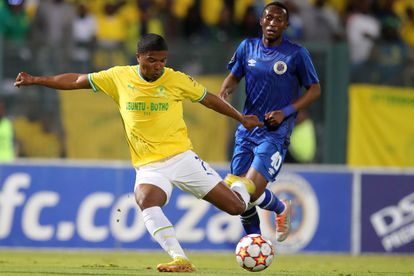 Sundowns co-coach Rhulani Mokwena has already confirmed that the club will be bidding farewell to some players ahead of the transfer window shutting on Thursday.

“We’ve welcomed Terrence (Mashego), we’re happy to have him but at the same time we know we can’t have too many players, the biggest business for Mamelodi Sundowns now is how do we trim the squad, who do we let go of,” Mokwena said on Sunday.

According to iDiski Times, Lyle Lakay – who signed a new contract last season – won’t be leaving Sundowns permanently, but is set to head out on loan to former club Cape Town City for the 2022/23 season. The same publication stated that Lakay has now has now arrived for his medicals with Cape Town City on Wednesday.

Meanwhile, just this past weekend Sundowns confirmed they had further bolstered their squad with the high-profile signing of Mashego, reportedly on a five-year deal.

Sundowns posted a video to social media, stating: “Let’s give a very warm welcome to Bafana Bafana left back, and one of our own, Terrence Mashego.”

Last month, Mamelodi Sundowns unveiled Marcelo Allende as one of their newest signings, and their fourth in the latest transfer window, and immediately included him on the bench against Stellenbosch FC.

Ahead of the new season, Sundowns had bolstered their squad with carefully-considered recruits, while the Brazilians warmly welcomed the arrival of Abubeker Nasir, who has already made an immediate impact.

This past week, coach Rhulani Mokwena did not give much away, but did explain how Sundowns go about their recruitment business.

“We beat off a lot of good competition to get Marcelo Allende – he has a proven pedigree. He plays for his national team, imagine the quality and calibre of the players in the Chilean national team and he is able to sit here with us and work with us every day.

“That is the place that we are in, we recruit the best players. Of course, at this moment in time when we bring in we have to let go because you can’t have your cake and eat it. But you can’t have too many – that’s the honest truth. But the club will make an official statement.”

Earlier this year it was also confirmed that Moroccan defender Abdelmounaim Boutouil would also be joining Masandawana.

The arrival of Boutouil and Allende were initially hindered by visa and work permit application issues, but Sundowns were working hard to have both players registered.

Boutouil signed a three-year deal and the hope is that Peter Shalulile (Namibia) will successfully receive a permanent residence approval in the near future. That would open up a spot for Boutouil to be registered as one of five foreign players along with Gaston Sirino (Uruguay), Nasir, Allende and Erwin Saavedra (Bolivia).

According to KickOff.com, this situation looks likely to successfully materialise before the close of the window on 22 September, and “Boutouil could be available as soon as the next game”.

Sundowns are currently at the summit of the PSL standings

When considering there will soon be a two-week Fifa calendar break, the hope would be for Boutouil to be available for the MTN8 semi-final on 1 October against Pirates if all goes according to plan.

The previous Sundowns signing to be officially unveiled was Bongani Zungu who marks his return to Chloorkop after leaving the club in 2016 to play internationally.

Meanwhile, with Sundowns needing to carefully balance their books in terms of the ‘foreign player’ allowance of five registered signings, Slovakian striker Pavol Safranko was recently let go by the club.