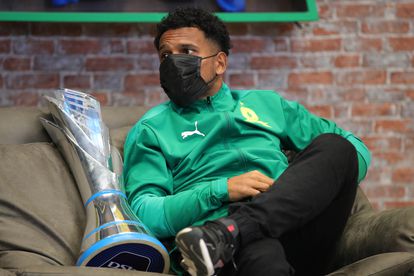 Mamelodi Sundowns striker Kermit Erasmus has admitted that he did not meet the lofty goals he had set himself in the recently concluded 2020/21 season.

Erasmus joined from Cape Town City FC at the beginning of the season, but saw injuries hinder his progress.

The 30-year-old set a target of netting 30 goals in his maiden campaign at Chloorkop, something that has never been achieved in Premier Soccer League (PSL) history.

READ | ARTHUR ZWANE: WE GOT WHAT WE CAME FOR BUT NOW WE NEED TO FINISH THE JOB

“In the first few games of the season, things were good, I just didn’t get to the 30 goals. If people consider me as a failure, so be it. I am not shamed to say that I failed,” Kermit Erasmus told the media.

“You have to be honest, you have to look how the season went and if I played all the games or not. Yes, people can be critical about it, I am critical myself about it, so there is no need for people’s criticism.

“So, I need to focus and work towards the next season. There is always opportunity to try and do it again. That’s the beauty of life and football.”

Meanwhile, Erasmus was full of praise for SuperSport United striker Bradley Grobler whose 16 goals this past DStv Premiership season saw him walk away with the Lesley Manyathela Golden Boot award.

“I think you can’t deny quality, if somebody has quality to produce the goods, the only thing that can stop you is injury. Congratulations to Brad [Grobler].

“That shows with consistency, playing regularly and being injury-free, what a difference it can make as an individual, and hopefully that could be something I can focus on in the new season when I come back [for pre-season],” Kermit Erasmus concluded.