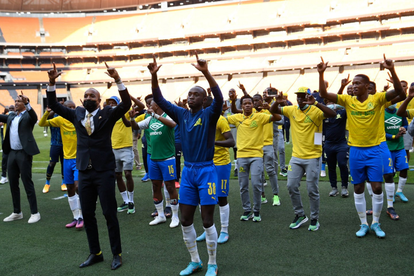 Mamelodi Sundowns moved to 54 points with a convincing 4-2 win over Swallows FC on Wednesday, and they appear to be home and dry.

As things stand, Sundowns are in pole position to win their fifth league title in a row, and mathematically, no team can catch them.

Royal AM are slowly but surely cementing the second position following their 2-0 win over Marumo Gallants. They are on 43 points with six games to go.

HOW IS THE DSTV PREMIERSHIP TITLE RACE SHAPING UP?

With Sundowns already on 54 points after 24 league games, they need 10 points from the possible 18 remaining to secure the title.

But should they win their remaining six games, Sundowns will finish the campaign on 72 points, and at this point, no any other team can reach that tally.

Shauwn Mkhize’s boys should be proud of the campaign they have had no matter where they finish on the Dtsv Premiership log this season.

Royal AM are placed second with 43 points from 24 games, and they could finish the season on 61 points provided they win all their games.

Amakhosi have played two fewer games than both Sundowns and Royal AM, and they are still hopeful of playing the two missed fixtures which were initially penciled for December 2021.

With 39 points next to their name, Chiefs still have 24 points to play for, and if they collect them all, they will finish the campaign on 63 points – they would have the second highest points tally behind Sundowns.

Cape Town City have recorded five straight wins, with their latest being a 1-0 victory over Maritzburg United on Wednesday.

They are fourth on the log with 39 points from 23 games – City have 21 points to play for, and should they win them all, they will finish the season on 60 points.

Pirates are aiming to win all their remaining matches, and Wednesday’s 1-0 win over Sekhukhune United has certainly set the tone for them to achieve that.

The Soweto giants, currently sitting on 38 points, still have 18 points to play for, and if they win them all, they will finish the season on 56 points.

THE VERDICT: ROYAL AM, CHIEFS, CAPE TOWN CITY AND PIRATES

The verdict is that Royal AM, Chiefs, Cape Town City, Pirates and the rest of the other teams closer to the four teams are vying for a second spot because no one WILL catch Sundowns.

The Brazilians WILL definitely be crowned Dstv Premiership champions even if they can drop a few more points before the end of the season.