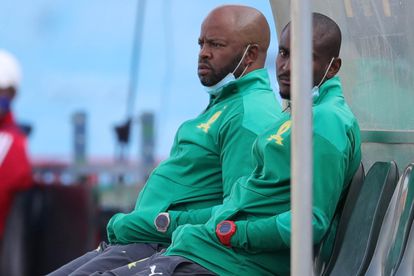 Despite the tremendous success of the club over the years, there was bound to be discord at some point with so many ‘cooks’ in the Mamelodi Sundowns kitchen. ©Samuel Shivambu/Sports Inc

Despite the tremendous success of the club over the years, there was bound to be discord at some point with so many ‘cooks’ in the Mamelodi Sundowns kitchen. ©Samuel Shivambu/Sports Inc

Kick-off for the encounter is at 3PM.

Mokwena said while Chiefs make a lot of changes week in and week out, the Sundowns technical team knows exactly who they will field in certain positions.

According to Mokwena, the Amakhosi front three of Khama Billiat, Samir Nurkovic and Lebogang Manyama is likely to start against Sundowns with Bernard Park just behind them.

“They make quite a lot of changes, but they’ve still got the big players back,” Mokwena told reporters.

“Khama is back, so more or less that front three of Khama, Manyama and Nurkovic is possibly what they could put on the pitch,” he said.

Mokwena admitted Parker may be used in different roles due to his versatility, but that is something Sundowns are already expecting on the day.

READ | ORLANDO PIRATES | COULD RICHARD OFORI BE LOST TO BUCS?

“But the last game against Cape Town City, where they had Baccus coming on as a sub, Blom as a six is possibly what you could find and still Ngcobo in midfield as a 10 or an eight,” continued Mokwena.

He also made mention of who could possibly start for Chiefs in defence, and he was partly correct given how Gavin Hunt has rotated his back four this season.

“Of course, they’ve got a strong defence, with (Siyabonga) Ngezana, (Mulomowandau) Mathoho, (Daniel) Cardoso and Reeve Frosler as a full back on the left side and you’ve got to be careful because a lot of the deliveries from the left are with his right foot,” he said.

“So, let’s see. It should be very interesting whoever they put on the pitch.”

Furthermore, Mokwena is mindful of the fact that Hunt may decide to bring back Anthony Agay to either play as a centre-back or in midfield with Daniel Cardoso possibly being moved.

“They still have Agay who is a possibility to play at center-half or in midfield. Cardoso can still play in midfield as they’ve done before. We will see how they line-up but based on our analysis, they will more or less line-up that way,” concluded Mokwena.