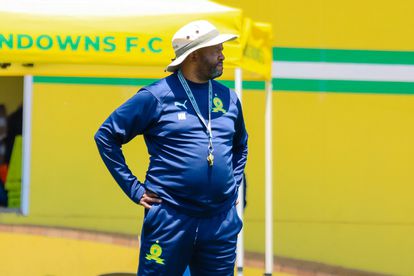 Despite dominating the South African football scene in recent years, Mamelodi Sundowns will incredibly not have a single player at this month’s Africa Cup of Nations (AFCON) tournament in Cameroon!

READ | AFCON: THE COMPLETE 52-MATCH SCHEDULE – PRINT IT OUT!

That is partly due to the fact Bafana Bafana did not qualify, and partly as a result of shrewd player recruitment.

As a result, Masandawana’s pursuit of a fifth consecutive domestic league title will continue without distraction and perhaps more importantly, without added player fatigue.

Mamelodi Sundowns have 5 African players on their books

This month’s delayed AFCON tournament kicks off on Sunday, 9 January and will conclude exactly four weeks later on Sunday, 6 February.

Mamelodi Sundowns have five players from African countries – outside of South Africa – on their books, but none of them will be at the tournament.

Star striker Peter Shalulile’s Namibia failed to qualify after they finished third in Group A in qualification with Mali and Guinea progressing.

Goalkeeper Kennedy Mweene’s Zambia also disappointed in failing to qualify from Group H where they too could only manage a third-place finish.

Kenya’s failure to qualify from Group G ended any chance centre-back Brian Onyango had of making his debut at the tournament.

Uganda veteran Denis Onyango announced his retirement from international football last year after The Cranes missed out on qualifying.

Finally, while off-season signing Divine Lunga’s Zimbabwe will be in Cameroon, the defender was not selected for the Warriors’ squad by coach Norman Mapeza.

READ | MAMELODI SUNDOWNS: WHAT DO THE BRAZILIANS NEED IN THIS TRANSFER WINDOW?

With Bafana Bafana disastrously having failed to qualify, it means Mamelodi Sundowns will have a full compliment of players during the AFCON.

Mamelodi Sundowns enjoy a yawning 14-point lead at the top of the DStv Premiership standings with just 11 matches remaining this season.

They need 28 points from a possible 33 to surpass the 71 points record that they set on their way to winning the 2015/16 title.

Mamelodi Sundowns ‘only’ need a maximum of 22 more points to be assured of a fifth-straight title and 12th overall in what is the 26th top-flight season in South Africa since the PSL era kicked off in 1996/97.

Masandawana will next be in action on 11 February in match day 1 of the CAF Champions League group stage at home against Sudan side Al-Hilal.

Their next DStv Premiership league assignment is another home match against struggling Chippa United on Wednesday, 16 February at 17:00.