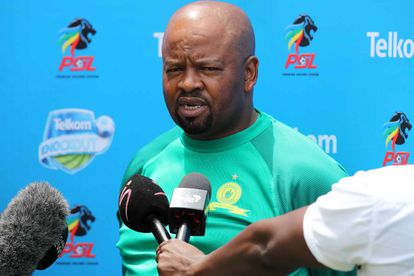 Mamelodi Sundowns coach Manqoba Mngqithi expressed gratitude at Stellenbosch, following a gesture they pulled in honour of defender Anele Ngcongca, who died in a car accident earlier in the week.

Ahead of the fixture between the two clubs at Loftus Versfeld, which ended in a 3-0 victory for the hosts, the two sets of players warmed up in special T-shirt bearing the former Bafana Bafana star’s face and the number 16, which he donned for most of his senior career.

On the 16th minute of the encounter, the game was paused, with players, match officials and technical staff all applauding for a minute.

Speaking after the final whistle, Mngqithi said it would have been easy for the Cape Winelands outfit to embrace the moment as they did.

“I just want to thank Stellenbosch in support of our celebration for Anele’s life. We really appreciate. It is not easy for them and their sponsors to allow themselves a shirt with Anele,” Mngqithi told SuperSport TV. “But they did with open arms, and we really appreciate it as Sundowns because it is very important for us to celebrate the life of Anele because this is a legend that has done well for this country-50 caps in the national team and so many trophies for Sundowns, the Champions League performances for Genk. He really deserves the respect that the club is giving him.”

Across the Premier Soccer League – with both Premiership and Championship players taking part – clubs observed a minute of silence prior to kick-off over the weekend.

The tributes were not limited to South African shores, with Ngcongca’s former club KRC Genk also paying its respects.

Ahead of their 5-1 triumph over Cercle Brugge in the Belgian top flight, “The Smurfs” also donned shirts bearing the deceased club legend’s name, as well as his famous shirt number.