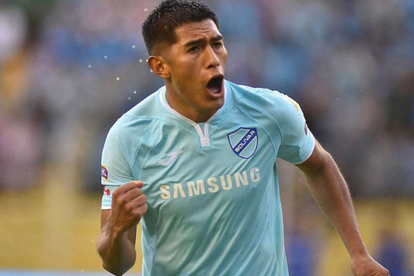 Mamelodi Sundowns are bringing a Bolivian in town. As The South African previously reported, the DStv Premiership champions have signed Erwin Saavedra.

So, what is the thinking behind signing another midfielder when there’s already a plethora in the team? Well, it is just to get stronger as the likes of Al Ahly and Zamalek in the CAF Champions League.

“Saavedra we’ve signed, we have registered him for CAF as well, so we have seen Erwin, he is a very good player by the way,” Mamelodi Sundowns co-coach Manqoba Mngqithi told the media last week.

While the deal to sign Saavedra was signed over a week ago, the Bolivian was on international duty as his national side took on the mighty Chile last week.

The question on fans’ minds is, when is he arriving? According to the latest reports, the 25-year-old took his flight on Sunday.

Presuming he arrived in Gauteng this morning, it is said he will rest on Monday before traveling to meet his new teammates at Chloorkop on Tuesday.

“My contract is for two and a half years, but if the club wants it can be extended for two more. I will miss Bolívar,” he said. “We wish Erwin Saavedra much success!” the outlet added.

Another question has been: where will the new star play in Kabo Yellow’s team? According to Transfermarkt, Saavedra has played his football as a central midfielder, right-midfielder, and as a number 10.

Meanwhile, Abafana Be’style are in camp before the DStv Premiership game against Chippa United on Monday at Loftus.