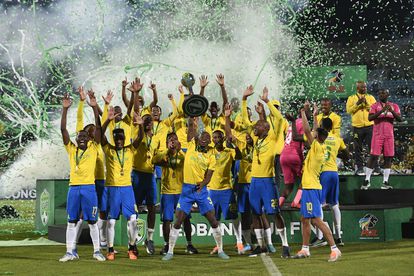 Mamelodi Sundowns wrapped up a ‘treble’ of Mzansi trophies this season after defeating Marumo Gallants 2-1 in the Nedbank Cup final on Saturday.

The win came via a 120th-minute Thapelo Morena winner.

With a penalty shootout was looming at the Royal Bafokeng Stadium, substitute Morena found time and space in the box to fire a low shot wide of Zimbabwean goalkeeper Washington Arubi.

Namibian Peter Shalulile put Masandawana ahead on 33 minutes, scooping the ball past Arubi as he slipped to claim a 30th goal in all competitions this season.

Ivory Coast-born Junior Dion levelled on 75 minutes, nodding a cross past Zambia goalkeeper Kennedy Mweene from what appeared to be an offside position.

TV replays suggested Dion was ahead of any Mamelodi Sundowns defender, but South Africa have not introduced VAR and the goal stood.

Mamelodi Sundowns back in CAF Champions League next season

That’s a cool R40 million for the Tshwane giants to divide among the team and management and spend on new recruits.

Next season, Mamelodi Sundowns and Cape Town City FC will represent South Africa in the CAF Champions League and Marumo Gallants and Royal AM or Orlando Pirates go into the second-tier CAF Confederation Cup.