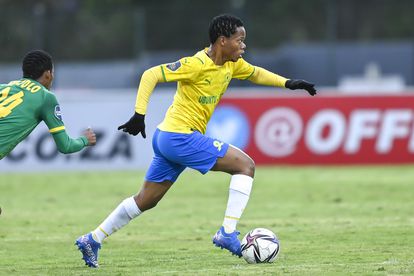 Mamelodi Sundowns are off to a flying start in the defence of their DStv Premiership title after seven matches of the 2021/22 season. Photo: Twitter @Masandawana

Mamelodi Sundowns are off to a flying start in the defence of their DStv Premiership title after seven matches of the 2021/22 season. Photo: Twitter @Masandawana

Mamelodi Sundowns are set to follow rivals Kaizer Chiefs and Orlando Pirates in a thorough clean-out at Chloorkop.

According to reports, the Brazilians are in talks with FOUR players over their immediate futures at the DStv Premiership Champions.

“Masandawana could part ways with more players in this transfer window, with some big name players believed to be in negotiations with the club.

“Veteran goalkeeper Kennedy Mweene could see his close to a decade stay at Downs come to an end if the club manage to get their target in Bafana Bafana and SuperSport United captain Ronwen Williams.

“Sibusiso Vilakazi still has about two years left on his contract with the club, but given the lack of game time over the past two seasons, albeit his exclusion sometimes owes to injury, he could also be on his way out of the club.”

According to recent reports, Mkhulise is looking for a move away from Sundowns due to limited game-time.

The highly talented midfielder has somewhat stagnated during recent seasons at the Brazilians.

And now, both Kaizer Chiefs and Cape Town City are interested in signing him should he be allowed to leave Mamelodi Sundowns!

“In the current transfer rumour mill, Sphelele Mkhulise’s camp is understood to be in discussions with Mamelodi Sundowns for a possible move for the 26-year-old.” a Citizen report read.

“At this point, it is unclear whether the proposed move, if it materializes, will be permanent or a loan deal.

“Kaizer Chiefs’ Arthur Zwane is also understood to be keen on Mkhulise as “10111” is one mentor who believes in giving youngsters a chance.

“And with Chiefs still looking to bolster their squad, anything could happen as far as Mkhulise is concerned.”

The same publication further went on to claim that Cape Town City are also interested in the 26-year-old midfielder.

Mkhulise made a total of 27 appearances for Mamelodi Sundowns last season. Worryingly, just 12 were starting berths.