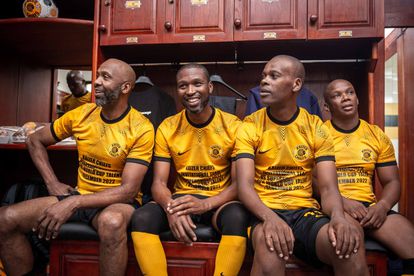 Kaizer Chiefs & SuperSport hosted a galaxy of football stars, past and present, in an exhibition match at the village on Wednesday.

Some of the world’s top ‘ballers and many of Amakhosi’s iconic former players, as well as SuperSport’s 2022 FIFA World Cup panel of expert analysts, visited the Club’s Kaizer Chiefs Village for a special exhibition game on Wednesday.

MDU OR DIE: Five reasons why Mduduzi Shabalala is going to the top

The stars come out to play at the Kaizer Chiefs village

In an entertaining match, the SuperSport team started well, cheered on by a large contingent of SuperSport and DStv staffers, but they ran out of steam as the Chiefs legends turned the screws in the second half to run out 7-4 winners.

“This was a great opportunity for the Club to host the calibre of world-class players we had at the Kaizer Chiefs Village today. It is important for us to continue growing our relationships in world football and all the players who were on the pitch today hold a special place in the hearts of football fans globally,” said Kaizer Chiefs Marketing Director, Jessica Motaung.

“This was also an opportunity for us to cement even more our very close relationship with our partners, SuperSport, and to celebrate their fantastic FIFA World Cup coverage and it was an absolute privilege to host SuperSport’s international and local panellists at the Village, who have kept the continent’s football fans engaged during what has been an enthralling FIFA World Cup. It was also very special to bring together so many of our legends and former players, who have not donned the Chiefs jersey in many years,” Motaung added.

Asamoah Gyan, now 37, is a bona fide Ghanaian legend and veteran of top-tier football in Italy, France, England, UAE, China, Turkey, India and Ghana. Talk about a guy who knows his football.

“It was a fun game to be part of and I was happy to score some goals. Some of the legends still have it,” Gyan told Chiefs media team.

“And it was great to be at the Kaizer Chiefs Village, the Club is one of the biggest clubs in Africa and the experience and the facilities was perfect.

“I wish Kaizer Chiefs all the best in the future and thank them for hosting us so warmly.”

Serial winner Hargreaves says it was a “wicked” experience

Hargreaves won 42 caps for England, and is a two-time Champions League and four-time Premier League winner. He won the European Cup with Bayern Munich as a youngster in 2001, and then with United again in 2008.

Hargreaves, who was SuperSport’s player-coach on the day added: “It was such a cool experience. It was wicked seeing different guys from different generations showing off their skills.

“It was fun being with the lads, we had a blast. The Kaizer Chiefs facility was amazing, I loved playing here.”

ICYMI: Everything you need to know about Bafana Bafana outcast Thulani Serero

Lucas Radebe back at home

Bafana Bafana, Leeds United and Kaizer Chiefs icon Radebe described being back ‘home’ at the Village as an absolutely amazing experience.

“This is where I started as a professional player. It’s great to come back and see how far the Club has come as well. The progress made since my playing days has been unbelievable. To see the boys again and to play football again on these fields for me was a real highlight. It brought back such great memories and it was so good to play with different generations of Chiefs players, and it was great to be around them, to be able to sit and chat and have some banter in the dressing room. It makes you appreciate where you come from. Kaizer Chiefs is a tight-knit family and it was great to be part of it again,” said Radebe.

What a massive vibe this event was!