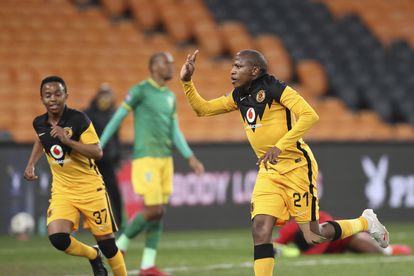 Lebogang Manyama of Kaizer Chiefs celebrates goal, third goal hattrick during the DStv Premiership 2020/21 football match between Kaizer Kaizer Chiefs midfielder Lebogang Manyama has acknowledged that he is honoured to have scored a hat-trick for the club, but wants to remain humble.
©Gavin Barker/BackpagePix

Lebogang Manyama of Kaizer Chiefs celebrates goal, third goal hattrick during the DStv Premiership 2020/21 football match between Kaizer Kaizer Chiefs midfielder Lebogang Manyama has acknowledged that he is honoured to have scored a hat-trick for the club, but wants to remain humble.
©Gavin Barker/BackpagePix

Lebogang Manyama is fully fit and training with Chiefs and could return to action for Amakhosi very soon.

The star midfielder has not featured yet this season but is now ready to bring his experience and magic to the Chiefs midfield.

Chiefs take on Baroka FC who are coming off an impressive 2-0 win against DStv Premiership newcomers, Marumo Gallants.

In contrast, Amakhosi failed to secure the win when they were held to a 0-0 stalemate at TS Galaxy on Sunday. The men from Naturena are desperate to get their first win under their belt and will have to overcome an energetic and highly motivated Baroka side to do so.

The Chiefs midfield has lacked that extra creativity and attacking edge that Manyama brings. There is no doubt that he will have brought priceless energy, skill and passion to Chiefs at training.

He is illegible for selection but will likely be gradually brought back since he hasn’t featured for the Soweto Giants in a while.

Unfortunately, Leonardo Castro and Dumisani Zuma are still out but Stuart Baxter may very well reward Dolly with his first Chiefs start in the DStv Premiership. The newly highest-paid man is expected to be announced when Baxter names his side today.

Expect more of the same elsewhere but Itumeleng Khune could potentially find his way into the starting lineup given the current rotation policy in-goal. Although, this is anyone’s guess at this point of the season.

Bruce Bvuma played in goal on Sunday and Khune started the MTN8 and the Carling Black Label Cup.

Daniel Akpeyi started their historic CAF Champions League final whilst Brandon Peterson was the hero of the penalty shootout in the Carling Black Label Cup off the bench.

All four of the men that Amakhosi have available in goal are ready to perform when given the chance and they are all high-quality players.

Chiefs take on Baroka at 17:00 at the FNB Stadium.

Will Chiefs get the first win of the season underway in their first home game?

R50k reward for info on suspects who killed German tourist

HEAT-INDUCED thunderstorms expected from TODAY in parts of SA

On This Day in South Africa: What happened on 05 October?