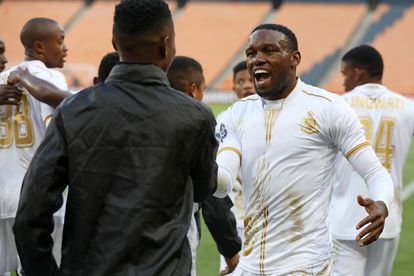 Bafana Bafana and Royal AM star striker Victor Letsoalo had been linked with a sensational move to Kaizer Chiefs during the previous transfer window, and those rumours have resurfaced at various time this year.

However, Royal AM CEO Sinky Mnisi previously insisted that Letsoalo ‘is a Rolls-Royce’ and Chiefs should not table an offer for a ‘Mazda 323’.

OPINION | RACE OVER FOR FADLU DAVIDS AND MANDLA NCIKAZI?

According to a report on SABCSport, the ‘price tag’ for Letsoalo may well have escalated from R4-million before the beginning of this season to R20-million now.

This comes after yet another standout season for the striker, who is set to finish second on the DSTV premiership goal scoring list, with the playmaker currently on 14 goals and two assists.

Chiefs caretaker coach Arthur Zwane has confirmed that the club is interested in the services of Letsoalo, but also effectively suggested the deal may be out of their price range.

“Is Victor Letsoalo the type of a player that can play for Kaizer Chiefs? The answer is yes. But can we get him, you understand what I’m saying?” said Zwane

“Those are the challenges, you know, that you are faced with? And it’s the reality, you know.”

Previously, Royal AM have distanced themselves from any suggestion that Letsoalo could make a move in the last transfer window.

“Royal AM wishes to distance itself from all media statements both print and electronic about the imminent sale of Victor Letsoalo to Kaizer Chiefs,” the statement read.

“As a team we think that people out there are trying to course instability in our team and cause confusion.

“We want to set the record straight and state categorically that we have not been in discussions with anyone concerning our player besides what we hear on media.

“We are also not interested to sell the boy as he is an important part of our participation and progress in the league. As a matter of fact the player is contracted to us and we have exercised our option until 2023.

“We wish to request all people to refrain from this malicious statements which are damaging to the image of our team and brand Royal AM.

“We all have to act responsible and stop punting for the release of the player from our team. We are a professional team and we are just asking to be treated as such. There is no deal nor any discussions with anyone.

“I hope this matter is now laid to rest and we would appreciate everyone to allow our team to continue with our successful journey in the PSL. More so considering where we come from and what we went through.

“We respect people’s opinions and wishes which people are entitled to but we also believe that our position should be respected that there is a NOT FOR SALE board at the moment.”

Interestingly, towards the end of last year, Letsoalo set the record straight in suggesting there was very little likelihood of him moving to the Soweto giants

Daily devotion: Your bible verse and prayer for 04 January 2023