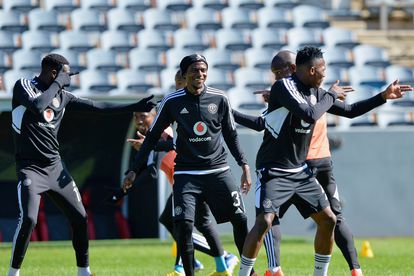 The busy fixture list in the DStv Premiership continues on Wednesday when Orlando Pirates travel to Durban to face Royal AM. Photo: Twitter @OrlandoPirates

The busy fixture list in the DStv Premiership continues on Wednesday when Orlando Pirates travel to Durban to face Royal AM. Photo: Twitter @OrlandoPirates

Orlando Pirates have renewed hope of a top-flight challenge and there has been plenty of news coming out of the Sea Robbers camp.

Here we wrap up the latest stories surrounding Orlando Pirates from the pages of TheSouthAfrican.com and across South African football media.

Orlando Pirate clinched their second win of the season after beating Royal AM at the Moses Mabhida Stadium on Wednesday night.

As The South African website reported on Wednesday night, a first-half goal from Deon Hotto was enough to earn the Sea Robbers all three points.

The current transfer window will close on 22 September 2022.

With just over a month to go, Pirates are currently linked with R18 MILLION worth of talent in the PSL.

Orlando Pirates may not be done recruiting just yet.

They have been just been offered one of the most promising stars in Africa, worth over R3 MILLION!

Pirates’ new star said clash with Chippa was a must win

Sibisi says the Sea Robbers will put themselves in a strong position if they can see off the Chilli Boys at Orlando Stadium.

Coach has fallen in love with Bucs’ fans

Orlando Pirates coach Jose Riveiro was blown away by the support the club has received so far this season.

The songs have been sung, but now the job must be done.

Riveiro knows what is expected

Orlando Pirates coach Jose Riveiro has revealed that he doesn’t have a mandate given to him by the management when he first joined the club.

Riveiro understands the expectations from the Soweto giants and their fans as they are a big club that needs to fight and win trophies.

Orlando Pirates have several valuable assets in their squad and many of those players are trending upwards as well.

Find out who the most valuable Sea Robbers are.

FIVE key things we learned about Pirates this week

Here are five factors Siseko Gwegwe observed from the game.

The second game of the season at Stellenbosch FC lacked real quality.

They couldn’t hold on but what a goal.

According to a shocking report from the Daily Sun earlier this month, the Pirates player’s black BMW vehicle and other items are said to have been taken during the hijacking, which reportedly took place in Johannesburg on 31 July.

The report stated that Pule was also kidnapped during the ordeal, although there aren’t many clear details.

Just two games into the new season, some Pirates players are already on thin ice.

Bucs players have been booked across two matches and risk suspension if they continue to offend.

A Swallows FC veteran defender continues to be linked with a possible move to rivals Orlando Pirates, and coach Dylan Kerr has now weighed in.

His absence in Swallows’ 1-0 loss to Pirates in the opening fixture of the season fuelled the speculation.

According to interesting reports that have now emerged this week, Ghanaian midfielder Edmund Arko-Mensah.