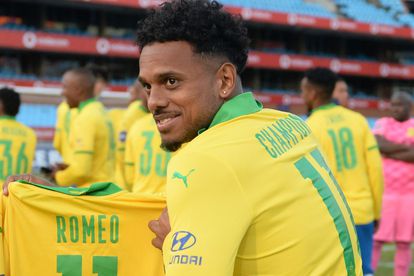 Kermit Erasmus has sent a farewell message to Mamelodi Sundowns after returning to his former club Orlando Pirates on transfer deadline day.

‘Romeo’, as he is affectionately known, spent two years with the Tshwane giants after joining from Cape Town City in 2020.

He has been lacking game time since last season and couldn’t stand being out of action anymore as he and the club decided to part ways before the window closed.

The experienced forward then penned a two-year deal with the Sea Robbers whom he left in 2016 to join French club, Stade Rennais FC.

As he turned his back on Chloorkop heading to Soweto, Erasmus offered some words of thanks to Sundowns, the Motsepe family and the Yellow Nation.

“To the Masandawana, the Chairman and the Motsepe family, thank you for the great two years I spent at an amazing football Club,” he wrote on his Twitter account.

“The family is what makes this Club, humility, respect and humbleness. To the coaches thank you for having worked with you. To my teammates I’m going to miss you…

“I wish you all the best for the rest of the season.

ALSO READ: MAMKHIZE: WHAT DAN MALESELA TOLD ME IN OUR MEETING