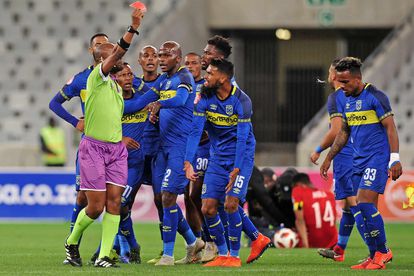 Kermit Erasmus of Cape Town City is given a straight red card by referee Eugene Mdluli for his foul on Mothobi Mvala of Highlands Park. Photo: Ryan Wilkisky/BackpagePix

Kermit Erasmus of Cape Town City is given a straight red card by referee Eugene Mdluli for his foul on Mothobi Mvala of Highlands Park. Photo: Ryan Wilkisky/BackpagePix

It’s that time of the PSL season where things get a bit tense and emotions run high.

Cape Town City had to play 72 minutes a man short on Tuesday night. Kermit Erasmus was red-carded for kicking, held visiting Highlands Park to a 1-1 draw thanks to a late Craig Martin goal.

What was he thinking?

The official Cape Town City account tried to lighten the mood a bit after the incident.

Cape Town City remains in fifth and Highlands Park are in eighth spot.

Coach Benni McCarthy, however, did not mince his words. The former South African international has been outspoken about the state of refereeing in the PSL this season and he let rip again on Tuesday night. He was quoted as saying:

“That’s what they wanted us to do. From the first minute, you watch and it’s the same referee every single time. Every time we get him. Against Wits, he gave them a penalty and apologised after that. Every time they want to apologise for the sh*t that they put on the pitch.”

However, the coach admitted that Eramsus’ behaviour was unacceptable.

“It was a good game of football I think. We tried to make the most by going at them. Kermit, stupid reaction, [he was] provoked I would say but then you bite and you leave your team with 10 men. In the end, the guys fought.”