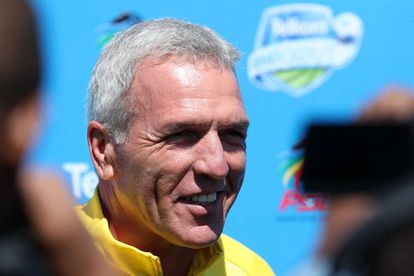 Kaizer Chiefs are within touching distance of cup glory as they face Maritzburg United at Mbombela Stadium in the second Telkom Knockout semi-final on Sunday.

Silverware has been elusive at Naturena over the past few years, with their last trophy coming in 2015.

Having been the form side in the ongoing season, with just one defeat so far, Amakhosi are the favourites to clinch the title, something which would cap off what has been a remarkable comeback on their part.

With good form comes bums in seats, and the match in Nelspruit is expected to draw a capacity crowd.

Coach Ernst Middendorp says the club has deserved the support they are currently enjoying.

“It’s definitely something you have to look into how it is now, and if you have experienced not long ago a total different story, going into a stadium wherever – Polokwane or Durban, and you’re not really supported in a way because you didn’t deserve it,” said Middendorp.

“It’s most definitely something that was very important for us to discuss during the pre-season and preparation time, it’s our responsibility to make it happen that people are coming and supporting – we have to do the first steps.”

Middendorp is up against his former side, now headed by a man who is one of the more recent winners of the Telkom Knockout.

Former Barnsley and Bafana Bafana midfielder Eric Tinkler was at the helm in Cape Town City’s first season in the top-flight, and guided them to the title in 2016.

He has seen Maritzburg United to a six-match unbeaten run, but is wary of the threat posed by their more fancied opponents.

“We know how strong they are, they are having a great season. We know their confidence now is very high, but we need to go there and be brave, not play with fear,” said Tinkler.

“I think they are playing differently to what they did last season, it’s a different team so I don’t think you can sit and compare, to be brutally honest, a lot of new faces.

“Samir Nurkovic has brought in something very different. I think they are a more direct team now then what they were in the past because of the height that he gives them up front. “Same as Leonardo Castro, so I think the planning can’t be the same like last season.”

Kick off and prediction

Prediction: Very hard to bet against Kaizer Chiefs, especially since they have discovered an uncanny ability to dig out a win from any position. Amakhosi to progress to the final.