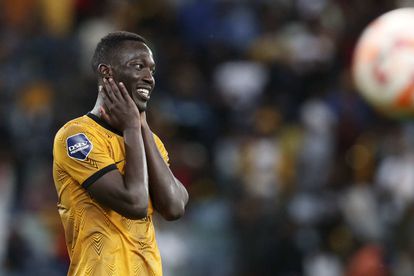 Caleb Bimenyimana of Kaizer Chiefs during the DStv Premiership 2022/23 match between Kaizer Chiefs and Chippa United at the Moses Mabhida Stadium, Durban on the 15 October 2022 Photo: Muzi Ntombela/BackpagePix

Caleb Bimenyimana of Kaizer Chiefs during the DStv Premiership 2022/23 match between Kaizer Chiefs and Chippa United at the Moses Mabhida Stadium, Durban on the 15 October 2022 Photo: Muzi Ntombela/BackpagePix

AmaZulu welcome Kaizer Chiefs to the Moses Mabhida Stadium for the second leg of their MTN8 semi-final clash this afternoon.

The sides played out to a 1-1 draw in the first leg meaning AmaZulu earned a vital away goal.

The winner of today’s clash will face Orlando Pirates after the Soweto side hammered Mamelodi Sundowns in their semi-final on Saturday.

Action at the Moses Mabhida Stadium gets underway at 15:30. The match will be televised live on SuperSport PSL and SABC1. You can also follow it in real time below.

AmaZulu vs Kaizer Chiefs: How to LIVE STREAM

I believe in my team – Arthur Zwane!

“We have a very good team that we believe can take us through to the final.” Arthur Zwane told the Kaizer Chiefs website.

“Obviously, their approach will be slightly different because of the new technical staff and you can see they don’t hold back.

“They attack well and sometimes they vary their game.

“AmaZulu like to get the ball forward early but they can also play a good passing game so they are dangerous.

“I don’t think they will go to (Moses) Mabhida and sit, because they want to protect their advantage and know that if we score then they’ll have to start chasing the game.

“I expect them to push to try and score first and make us need to score twice. Their coach is a good coach. There’s no doubt about that and it will be end-to-end stuff.”