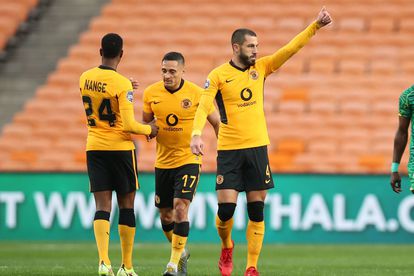 Daniel Cardoso celebrates a goal with teammates during the DStv Premiership 2021/22 match between Chiefs and Baroka FC on 25 August 2021 at the FNB Stadium, Johannesburg ©Muzi Ntombela/BackpagePix

Daniel Cardoso celebrates a goal with teammates during the DStv Premiership 2021/22 match between Chiefs and Baroka FC on 25 August 2021 at the FNB Stadium, Johannesburg ©Muzi Ntombela/BackpagePix

Kaizer Chiefs have confirmed the broadcasting details of their Saturday’s league encounter away to AmaZulu.

The two teams will lock horns at the iconic Moses Mabhida Stadium.

According to Chiefs, the crucial encounter against Usuthu will be screened LIVE on SuperSport PSL channel 202.

And there is no confirmation, as yet, from the SABC Sport if the match will also be available on any of their free-to-air platforms.

Chiefs find themselves under immense pressure to turn their campaign around after what has been a poor start.

Since Stuart Baxter’s return, Chiefs have won just once in seven official games – and this includes two defeats and two draws in their opening five league matches.

AmaZulu, too, haven’t had the best start to their season as they have won just once, lost once and drawn three of their five games.

So, going into Saturday’s match, both Stuart Baxter and Benni McCarthy know they are under immense pressure to win the game.