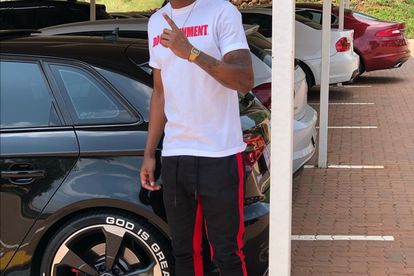 Former Kaizer Chiefs and current Swallows FC goalkeeper Virgil Vries may be struggling with injuries the moment but his ride is something to behold.

The Namibian shot-stopper has been sidelined with an injury that he picked up while on international duty with Namibia in 2021.

The former Kaizer Chiefs keeper has only made four league appearances for Swallows this season with Thela Ngobeni and Jody February stepping in as his replacements.

Vries confirmed that he’ll be undergoing an operation to remedy his current injury however despite his injury concerns, he remains positive on social media.

The Namibian goalkeeper who was subjected to constant abuse by Kaizer Chiefs fans after a sour spell at the Glamour Boys between 2018 and 2019 often gives his social media followers a glimpse into his personal life.

Take a look at the former Kaizer Chiefs and Maritzburg United goalkeeper’s stunning Audi RS3 which is reportedly valued at almost R1 million below!

“I was playing with an injury. I got injured while with the national team in September,” the former Kaizer Chiefs goalkeeper said.

“On the 8th, I’m doing my operation with the club. I’m not aware of anything [regarding the exit rumour]. Me and the club have been speaking the whole of December and I got my date for my operation. I signed a new two-year deal with a one-year option with the club at the beginning of the season.

“The club would have informed my agent, and my agent hasn’t said anything to me. I’ve been injured and that’s the reason I’m not playing this whole time because of my knee injury. I talked to the team manager and he told me it’s all lies. So, as long the club hasn’t informed me, it’s just a rumour.”

READ NOW: AMAZULU BOSS SANDILE ZUNGU WAGES WAR ON KAIZER CHIEFS OVER THE WAY THE AMAKHOSI HAVE GONE ABOUT THE TRANSFER PURSUIT OF SIYETHEMBA SITHEBE!