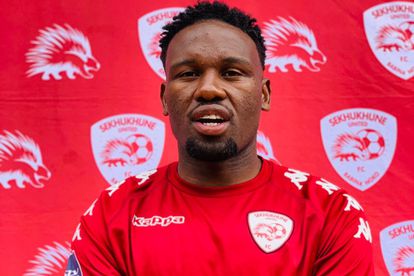 Victor Letsoalo has explained why he ended up at Sekhukhune United rather than at his long-time admirers Kaizer Chiefs.

Kaizer Chiefs’ faithful were already picturing the clinical Royal AM finisher banging goals for them this upcoming season. This follows rumours which strongly linked the 29-year-old to a move to Naturena.

On the other hand, Thwihli Thwahla were already convinced that they’d managed to keep their man, but he suddenly asked for a transfer.

READ ALSO: SUNDOWNS LOAN OUT ANOTHER DEFENDER, THIS TIME TO RICHARDS BAY FC!

His Sekhukhune move was quite a shock because they were hardly mentioned among teams interested in Letsoalo.

WHY LETSOALO ENDED UP AT SEKHUKHUNE RATHER THAN CHIEFS

He says he chose Babina Noko because they showed more interest than Kaizer Chiefs and he foresaw a bright future in the club.

“It was just a transfer and my agent told me that Sekhukhune are interested, and looking at the rumours going on we decided to join them because they showed more interest,” Letsoalo explained to the media as quoted by the SowetanLIVE.

“We just chose them because there is a lot of excitement that is going to come out from the team.

“There was interest from Chiefs but they ended up in the air. I am a Sekhukhune player now and I’m excited to be here. Sekhukhune is also a big brand.”

“Everything has been going well since I arrived here. We’ve prepared well. Even the friendlies that we took part in we played well and as a group we are looking forward to the new game of the season,” he said.

“Personally I’ve set my target, every season I do that. Expectations, obviously I’m just looking forward to the games to try and get goals, get assists and results for my team.

“With the group that we have, we are coming well together. We’ve seen many quality players here and we support each other. I’m going to fight for the top goalscorer because my job is to score goals and win games for my team.”