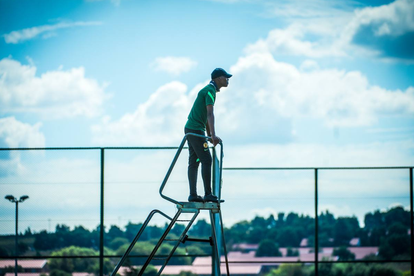 Kaizer Chiefs are expected to make a decision on the future of Burundi international Bonfils-Caleb Bimenyimana who is currently being assessed.

Bimenyimana arrived at Naturena a couple of weeks ago, and according to the latest reports, the 24-year-old has impressed the Chiefs technical team.

According to iDiski Times, Arthur Zwane and his technical team are convinced that Bimenyimana is the right centre-forward to lead their attack next season.

“And the club’s technical team around Arthur Zwane and Kaizer Motaung Jr. are believed to be hugely impressed by him [Bimenyimana].”

Bimenyimana has reportedly scored two goals in the three friendly games he has, so far, played for Chiefs during his trial period.

And that alone could have played a huge role in Chiefs considering to offer him a professional contract ahead of the 2022-23 PSL season.

Chiefs are desperately looking for a quality No.9 that will play alongside Ashley du Preez who arrived on a three-year deal from Stellenbosch.

The Soweto giants only have Du Preez and Mduduzi Shabalala as their forwards if one doesn’t include both Khama Billiat and Keagan Dolly.

And that’s because Chiefs recently parted ways with Leonardo Castro, Samir Nurkovic and Lazarous Kambole who were their ‘trusted’ strikers last season.