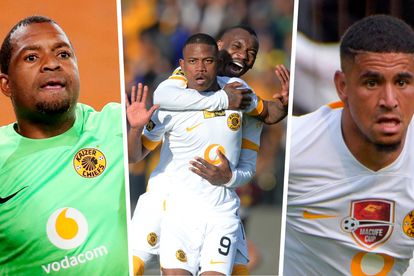 Kaizer Chiefs have a total of SIX players contracts coming to an end. Unfortunately, for these three men, it is likely to spell the end of their Amakhosi careers.

We look at the THREE players who are unlikely to earn contracts and could find their way out of Naturena.

JUST IN: KAIZER CHIEFS WELCOME BACK FOUR PLAYERS TO NATURENA

Erick Mathoho, Phathushedzo Nange and Khama Billiat are all unlikely to have their contracts renewed at Amakhosi.

Therefore, all three of these men could leave Chiefs come the January transfer window, or at the latest June 2023.

Amakhosi legend Mathoho is no longer first choice, in fact he is seldom used at all. Zwane prefers using Zitha Kwinika with either Edmilson Dove, Siyabonga Ngezana or Njabulo Ngcobo.

Under Stuart Baxter, Mathoho was used frequently but what was also far too frequent was the costly errors he made which made him fall out of favour with Zwane and Dillon Sheppard. Now, he faces a likely, almost imminent exit from Amakhosi.

Billiat is the other player at risk of leaving Naturena.

Despite being one of Amakhosi’s top earners, he has failed to impress in recent seasons. Billiat was hired to score and he has struggled to do so, scoring just three goals in 11 matches across all competitions. Furthermore, he continues to battle with injuries and when he is fit he does not offer much threat going forward.

Finally, Nange has gone from being an instrumental part of Amakhosi’s team last season to hardly featuring under Zwane.

His contract comes to an end in June 2023. Meaning, he is able to sign a pre-contract this January. Nange was also linked with a potential swop deal for Sibongiseni Mthethwa from Stellenbosch FC but talks seem to have gone quite. Furthermore, a move for Nange will be in his best interests given that Yusuf Maart is now an instrumental part of Zwane’s midfield.