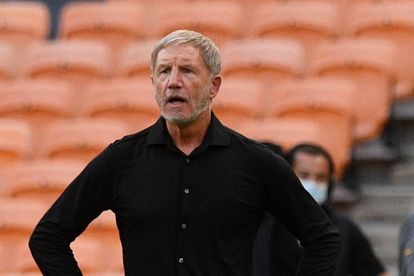 Under fire Kaizer Chiefs coach Stuart Baxter has hit back at fans who heckled him at the FNB Stadium after their loss to SuperSport United. Photo: Sydney Mahlangu/BackpagePix

Under fire Kaizer Chiefs coach Stuart Baxter has hit back at fans who heckled him at the FNB Stadium after their loss to SuperSport United. Photo: Sydney Mahlangu/BackpagePix

A former Kaizer Chiefs star has hit out at head coach Stuart Baxter for comments he made recently.

Baxter responded to Amakhosi fans that were calling for his head by claiming he’s the only coach that brought success to the club in the last 20 years.

Former Kaizer Chiefs defender Themba Seli has since urged Stuart Baxter to forget about his past glories at Naturena and accept the fact that he is failing the Soweto giants!

“This coach is too defensive and very scared to lose. To say he is the last coach to bring silverware to Naturena or the best coach in the last 20 years doesn’t mean anything.” Themba Seli told Kick-off.

“Big clubs like Kaizer Chiefs don’t live on past glories or past achievements, every season they need to produce results. He must just leave as he has already failed.

“The league is gone, the MTN8 trophy is gone, the Nedbank Cup is gone so why is he still there? We should be building for next season with a new coach already.

“I don’t see him qualifying for the CAF Champions League. Where are all of those players that were bought in for him at Kaizer Chiefs from Swallows and the other teams?”

What did Stuart Baxter say?

“I don’t have any message to the fans because if they want me to go, I’ll go,” Baxter told the media following Kaizer Chiefs’ loss against SuperSport United.

“If the chairman says to me, I don’t think you’re doing a good job; then I’ll walk. I’ve got no problem doing that. I will walk myself.

“If I don’t think I’m affecting Kaizer Chiefs in a positive way, I’ll walk, not a problem. I’m the only coach that has given this club any success in the last 20 years, but I’ve got to go because we dominate the game and lose 1-0?

“If I get that feeling, then, of course, I’ll walk. But at the moment, I’m looking at it as a game we should’ve won, but we didn’t, and that happens in football.”