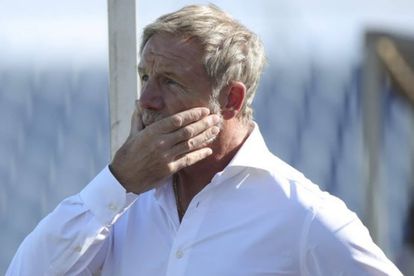 Kaizer Chiefs have officially announced the sacking of Stuart Baxter as their head coach with immediate effect.

Media reports of Baxter’s sacking surfaced on Thursday morning but the club took almost the whole day without saying a word.

However, Chiefs said the two parties agreed to part ways after ‘a series of meetings’ that took place on the day.

Baxter leaves Chiefs in his second spell having taken charge of 26 competitive matches, including the CAF Champions League final against Al Ahly in July 2021.

He won 11, drew six and lost eight – and the club felt Baxter wasn’t the right man to take the team forward

In a statement, Chiefs wished Baxter well in his future endeavours, adding that further announcements will be made in due course.

After a series of meetings, Kaizer Chiefs and coach Stuart Baxter have come to a mutual agreement of an early termination of his contract with immediate effect.

In his second spell with Kaizer Chiefs, Baxter has led the team in 23 matches (excluding 3 league matches in December 2021). He managed to win 9 matches, draw 6 and lost 8 of the games. The team managed to score 25 goals and concede 23 during that time.

Assistant coaches Arthur Zwane and Dillon Sheppard will take charge of the senior team for the remainder of the season, starting with the next match against Stellenbosch FC on Saturday, 23 April 2022.

We wish him well in the future.

The Club will make further announcements in due course.