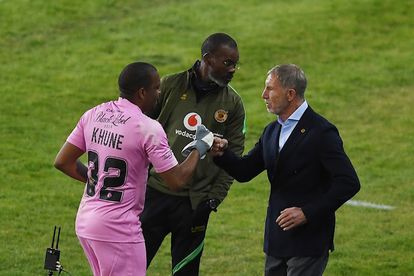 Speaking to the media on Thursday, Baxter was questioned about Khune’s lack of game time and what the future holds for the 34-year-old keeper.

Khune hasn’t featured for Chiefs since August 2021 against Mamelodi Sundowns in the MTN8 – and he appears to have fallen out of favour with Baxter.

READ | ORLANDO PIRATES VS KAIZER CHIEFS: HOW TO WATCH THE SOWETO DERBY ON TV

This despite some impressive saves and performances Khune put in during the DStv Compact Cup where he featured for eventual champions Warriors FC.

While Khune continues to be sidelined, Baxter admitted that he’s still a big fan of the former Bafana Bafana skipper but his return to the team will depend on a lot of factors.

READ | FIVE BIG DECISIONS TO MAKE FOR THE SOWETO DERBY!

To this day, Khune hasn’t dropped the ball by slowing down at training, and that is what matters the most for Baxter who’s happy that the goalkeeper is still making himself selectable.

However, Baxter couldn’t commit as to when Khune will be back in the Chiefs starting line-up, before adding that it could happen at any given time.

BAXTER’S COMMENTS A BLOW FOR KHUNE AT KAIZER CHIEFS?

“The credit that I give to Itu is the fact that he has such an outstanding career. He played for me in the national team and for the title-winning Chiefs team, and he finds himself in a position he is in with arguably the best goalkeeper squad in the league,” said Baxter.

“And he is still coming to training every morning, doing his work and making himself as available as possible. If he was to stop doing that, you would see a lot of things drying up for Itu.

“But he has decided he wants to be serious about his career and put as much pressure on the others as he can and give himself the best chance.

“When he doesn’t do that, he will probably knock on my door and say, ‘coach, you know what? I’m throwing myself around in the penalty area and getting kicked… I am going to pull out’ – he hasn’t done that, and we are very pleased about that, and he is still competitive,” continued Baxter.

“So, I can’t tell you when he is going to get in the team; it will be a lot of factors, I am sure, but as long as he keeps himself available and selectable, then he’s always got a chance.”

“We have got competition between our goalkeepers that you could be seeing Itu on the bench or starting in the next game,” added Baxter.