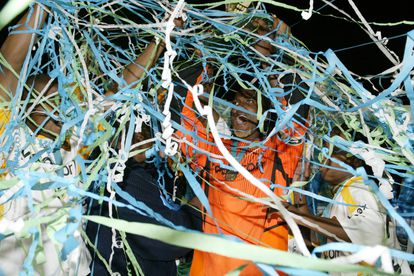 Kaizer Chiefs remain South Africa’s most decorated club despite a number of years in the shadow of Mamelodi Sundowns.

Sundowns hold a big lead in terms of top-flight title wins the PSL-era and are a couple wins ahead in the overall league wins stakes but they aren’t really close to passing Chiefs overall trophy haul.

Kaizer Chiefs last lifted a trophy all the way back in 2015 which makes their silverware haul that much more impressive.

They also hold four titles in the old National Professional Soccer League, but it is in the cup competitions that they have gathered the most silverware.

While Sundowns have continental success to brag about, Chiefs have achieved unprecedented levels of success in domestic cup competitions.

ALSO READ: Why Pitso Mosimane did not return to Sundowns

Now called the Nedbank Cup the competition has been contested under six different names and Kaizer Chiefs have achieved wins under each banner.

However, during the time of the Mainstay Cup the trophy was lifted five times with three coaches at the helm in Mario Tuani, Eliakim Khumalo and Ted Dumitru.

Zwane’s men happy for the run

They only won the Bob Save Super Bowl twice and won the tournament once under both the ABSA Cup umbrella and in its current guise as the Nedbank Cup.

They won that tournament under each of its names except during the time it was known as the Coca-Cola Cup between 1992 and 1996 when their best effort was reaching the 1992 final only to lose to Amazulu.

Finally, Kaizer Chiefs also have a record number of Top 8 trophies in their massive cabinet having won the event 15 times between 1974 and 2014.

The club have also won numerous friendly cup trophies alongside their single continental success in the 2001 African Cup Winners’ Cup.