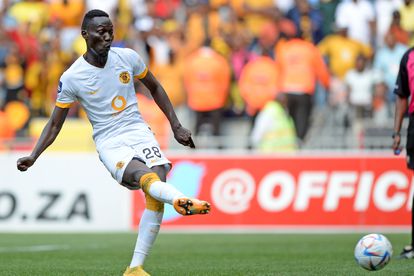 Caleb Bimenyimana of Kaizer Chiefs completes his hat trick of goals from the penalty spot during the DStv Premiership 2022/23 game between Stellenbosch FC and Kaizer Chiefs at Cape Town Stadium in Stellenbosch on 9 October 2022 Photo: Ryan Wilkisky/BackpagePix

Caleb Bimenyimana of Kaizer Chiefs completes his hat trick of goals from the penalty spot during the DStv Premiership 2022/23 game between Stellenbosch FC and Kaizer Chiefs at Cape Town Stadium in Stellenbosch on 9 October 2022 Photo: Ryan Wilkisky/BackpagePix

Arthur Zwane says Kaizer Chiefs are a work in progress as they attempt to restore their former glory and patience is needed.

Zwane believes that the key remains just to take things one game at a time in their hard slog.

Chiefs have made a stuttering start to their 2022/23 campaign..

Back to the top

The Glamour Boys coach says that his team are coming along.

“We are a work in progress, we’ve been working hard, and we know there’s going to be a reward.

Zwane added:”We are reaping that reward at the moment,” Saying “we want to keep it that way,” in assurance.

“We are taking it one game at a time, we don’t want to think about other things. We don’t want to cloud ourselves with a lot of things in our heads,” Zwane added.

The application shown by his charges in recent weeks thrills Zwane who has also opened up on the pressure of being Chiefs coach.

“It was quite tough, very stressful. But that was understandable, at the same time, it comes with the demands of being the coach of Chiefs,” Zwane said according to IOL.

“So luckily for me, I grew up in this environment. As a player, and now as a coach, I think I’ve seen it all and experienced a lot of things in the period.

“When I was given the opportunity, I expected such things to happen. I knew it wasn’t going to be rosy, and my character was going to be tested as well.

“It was also going to improve my intelligence. I am where I am because of a lot of people that played a role in helping me to be the person that I am.”