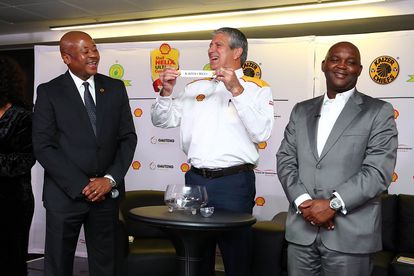 A very well-known former Kaizer Chiefs coach has opened up on what he refers to as war with Pitso Mosimane! This gets juicy…

READ | PITSO MOSIMANE TO JOIN MAMKHIZE AT ROYAL AM? THREE REASONS HE COULD SIGN!

Mosimane is one of the most loved coaches in the history of South African football.

However, there was a time when Mosimane engaged in a war of words with a well-known former Chiefs coach.

Former Amakhosi coach Ernst Middendorp recently opened up about a deep conflict he had with Mosimane.

The conflict was so deep and intense that he described it as ‘War’.

Middendorp and Pitso were rivals at a point due to the tremendous passion and drive they had to win games.

“With Pitso on the field, it was a war. Absolutely he had an interest. He wanted to win games, I wanted to win games too, that is the passion we had. He was never satisfied with what he had. It doesn’t matter if he had won 4-0. As the coach of this level you are not satisfied,” Middendorp stated on iDiskiTimes.

HUGE STORY: STAGE 8 LOAD SHEDDING – WHAT DOES THIS MEAN FOR THE WHOLE OF SA?

“If you are working at Chiefs, Orlando Pirates, or with Sundowns, you must have the mentality to never be satisfied. If you are a coach and you are coaching these teams and you are satisfied, sorry, you are not the right manager,“

“In all the games we played, it didn’t matter if it was a cup game, league match, it was always a very aggressive moment for each other. But off the field the respect was there and good, that is what it is,” Middendorp added.

These two men have a history that goes way back. Before Middendorp took charge of Chiefs in 2018, Mosimane said he was on holiday in Thailand while the former Chiefs coach was technical director of Bangkok City. Then, when Mosimane was in charge of Mamelodi Sundowns, he stated that Chiefs were benefitting from poor referee decisions.

This was all before the two coaches met on the sidelines at Loftus in October 2019. On that day, Mosimane was infuriated at Samir Nurkovic’s second goal. He felt it was offside and should not have stood.