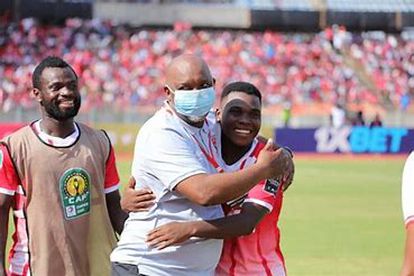 Kaizer Chiefs have just been offered one of Pitso Mosimane’s former players, a striker that ‘Jingles’ personally signed and former Mamelodi Sundowns striker!

Amakhosi have been the busiest team so far this transfer window but they are about to get even busier!

The man that was personally signed by Mosimane could follow him back home to South Africa. Except there’s one key difference… if he does this, he will come to the heart of Soweto and join up with Amakhosi.

This is a strong possibility as Miquissone has just been offered to Chiefs, according to Phakaaati.

Jessica Motaung confirmed that Chiefs will be signing THREE more attackers to Naturena and Mosimane’s signing may very well be one of them.

Mosimane is the man responsible for bringing the 26-year-old Mozambican right winger to Egypt. Now, he may not be involved in the move but nonetheless, it remains a strong possibility.

He is a very strong and agile runner capable of causing headaches to any opposition defense in the DStv Premiership. Imagine having to contend with Keagan Dolly, Khama Billiat, Ashley Du Preez and Miquissone?

Goodluck to the likes of Orlando Pirates, Mamelodi Sundowns, Cape Town City and MaMkhize’s Royal AM if Chiefs accept this offer.

“The club from that side Kaizer Chiefs are said to be interested in him after he was offered to them and Al Ahly are open to the idea of selling him to them,” a source close to the player confirmed.

They do face stiff competition from African giants Simba SC who are also interested in loaning the forward next season. Thankfully, Chiefs have an advantage because they actually want to sign the player.

“There is also Simba who are interested in having him back. But Chiefs have an advantage because they want to sign him straight out while Simba wants him on loan,“ the source added.

Would you like to see Miquissone at Naturena next season?

‘I cant help you’: Zinhle labelled ‘arrogant’ over customer response