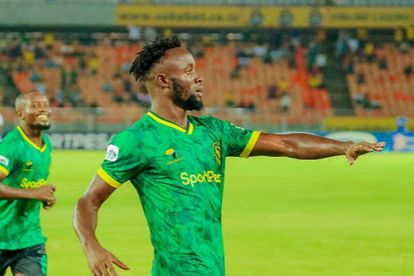 Orlando Pirates and Kaizer Chiefs have a new striker target, and he’s a Democratic Republic of Congo (DRC) international playing in Tanzania.

Young Africans (Yanga) striker Fiston Kalala Mayele has emerged as a real target for the two Soweto giants, according to SABC Sport.

Mayele is the Tanzanian Premier League top goalscorer, and according to Yanga CEO Senzo Mbatha, ‘big’ South African clubs have shown interest in the centre-forward.

However, neither Pirates nor Chiefs have submitted a written bid for Mayele but Mbatha said he frankly told them that the striker isn’t available at this stage.

And that’s because Yanga want to do well in the CAF Champions League, and they still need the services of the 25-year-old marksman.

Chiefs are in the market for a proper No.9 after having parted ways with both Leonardo Castro and Samir Nurkovic in early June.

Pirates, on the other hand, are not so desperate to sign a striker as they already have Beinvenu Eva Nga and Kwame Peprah among many strikers on their books.

“For sure, there have been phone calls – you know, I’ve got colleagues all over Africa, I’ve received three phone calls from South Africa, big clubs showing some interest,” Mbatha told SABC Sport.

“Though the interest has not been expressed in writing or anything like that, the enquiries have been there and I’ve been quite frank to say that he’s not available, he has a contract with us and we want to do well in the interclub competition [CAF Champions League].

“One thing you cannot run away from when you have one or two, or three, of your players doing well, you’ll have people showing interest because they think that maybe they have a much better spending power than you, so they can convince you otherwise.”