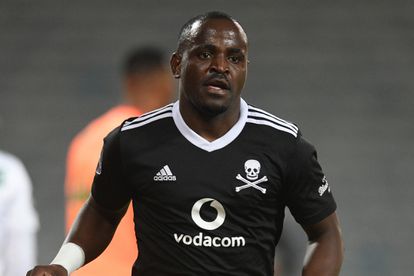 Orlando Pirates forward Gabadinho Mhango is the perfect answer to Kaizer Chiefs’ striker search and he is available to be signed right now!

Amakhosi are in desperate search of a quality forward which Mhango certainly is.

Added to this is the fact that the Malawian is now available, according to recent reports.

Mhango is a quality finisher, which is just what Chiefs need.

He has hardly been able to play for Pirates since returning from AFCON and this does not look like changing anytime soon. Mhango was frequently dropped from the matchday squad altogether. He made a couple of appearances off the bench however, Pirates management recently critiqued his discipline issues.

Mhango is just what Amakhosi need and he certainly needs a fresh start, which a move to Naturena would provide.

Currently, their are no official negotiations between Mhango and Chiefs. With the star looking to play regularly, he will certainly consider a move if he does not see more gametime – and soon. This is looking increasingly unlikely which will favour Chiefs and any side’s interested in his inspirational talent.

Earlier this year, he scored one of the best goals you will see at AFCON! Mhango also racked up 16 goals in his first season at Pirates.

Amakhosi are looking for a finisher and they may not have to pay too much… Chiefs would be offering his career a new start and his contract expires soon!