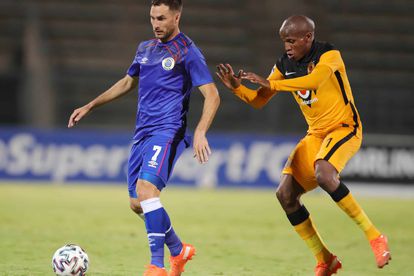 Bradley Grobler has responded to rumours linking him with a potential move to either of the Soweto giants. Will he sign for Kaizer Chiefs or Orlando Pirates?

READ | FROM 4 MILLION TO R8 MILLION! KAIZER CHIEFS STRIKER IS NOW WORTH DOUBLE!

Grobler was once dubbed as the DStv Premiership’s best striker by Benni McCarthy. Now, he has been linked with two of the most iconic side’s in the PSL…

Chiefs and Pirates. So, could we be seeing Grobler in Soweto next season? Find out from Grobler himself.

Many young boys grow up dreaming of playing for Kaizer Chiefs or Orlando Pirates one day. Grobler, is apparently not one of them. Here is what the SuperSport United and former PSL Golden Boot recipient had to say:

“So, regarding the big two clubs, maybe one day when I’m done playing I will look back and think about it and then maybe regret it,” Grobler said on Goal.

He is happy playing in Tshwane for SuperSport and would rather continue their then play for Amakhosi or the Bucs.

“But I have really enjoyed all my years here at SuperSport. In my view, SuperSport have always been the best team for me. We compete a lot and win cups and trophies,” Grobler added.

He is unlikely to ever play for one of these sides but it is not impossible. Grobler did hint at the possibility of playing for another club.

“At the same time, I have been at SuperSport United for quite a long time. SuperSport is a great club, I have won a lot of things here,” Grobler said.

For now, he is contend where he is. A move to the Soweto giants looks very unlikely but a move elsewhere is still possible in the future.

Where do you think Grobler may end up if he leaves SuperSport United someday?