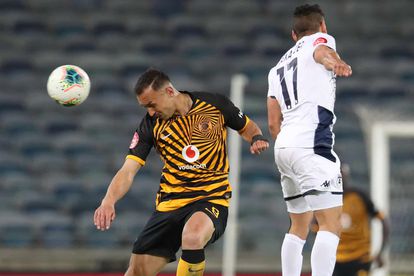 Samir Nurkovic of Kaizer Chiefs challenged by Cole Alexander of Bidvest Wits during the Absa Premiership 2019/20 match between Kaizer Chiefs and Bidvest Wits at the Orlando Stadium, Soweto on the 12 August 2020 ©Muzi Ntombela/BackpagePix

Samir Nurkovic of Kaizer Chiefs challenged by Cole Alexander of Bidvest Wits during the Absa Premiership 2019/20 match between Kaizer Chiefs and Bidvest Wits at the Orlando Stadium, Soweto on the 12 August 2020 ©Muzi Ntombela/BackpagePix

Kaizer Chiefs leading scorer last season, Samir Nurkovic, has reportedly undergone surgery and could be out for up to two months.

Nurkovic completed the 2019/20 season with the aid of painkilling injections to manage a niggling groin injury.

Kaizer Chiefs have yet to confirm that their star forward has gone under the knife, but reports suggest he has undergone surgery and will miss the start of the season.

Nurkovic had been at the heart of the best performances throughout the 2019/20 season but did not return from lockdown in the same form as he started the term.

The Serbian, who joined Kaizer Chiefs at the start of the season, scored 11 goals in 19 matches before the pandemic brought the season to a halt but managed just two goals in seven matches in the bio-bubble.

Nurkovic was a revelation for Chiefs providing both strength in the air as well as skill on the ball.

Depleted Amakhosi in a pickle due to transfer ban

Kaizer Chiefs will be particularly concerned about the injury given their inability to sign a replacement for the striker.

The Glamour Boys have been slapped with a two-window transfer ban over the purchase of Andriamirado’ Dax’ Andrianarimanana from Fosa Juniors.

Chiefs were given until 9 September to make representations and prove their innocence to the Court of Arbitration for Sport, who are hearing the club’s appeal against the Fifa ruling.

The appeal is Chiefs last hope of being able to reinforce their squad ahead of the start of the 2020/21 season which will start in October.

“Kaizer Chiefs’ appeal against their two-window transfer ban was heard by the Court of Arbitration for Sport today, Wednesday, 9 September,” a club statement read.

“The club will await for the outcome on whether the appeal is successful or not.”

Nurkovic not the only absentee

Kaizer Chiefs will be hopeful of getting their second-highest goalscorer from the 2019/20 season fit again as well. Leonardo Castro was recontracted before the bio-bubble but was put on ice with a hamstring strain.

The 31-year-old Colombian should recover in time for the new season, but it remains to be seen if their new coach will have room in their plans for the target man.

Chiefs have also seen influential midfielder George Maluleka transfer to rivals Mamelodi Sundowns and will need to strike a balance between clearing out the deadwood in their squad and maintaining the depth required for another title challenge.