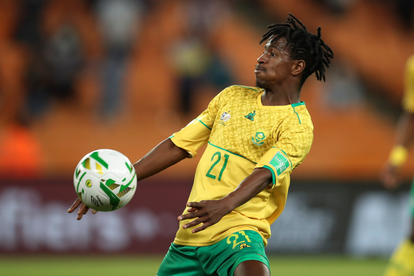 Bafana Bafana have been dealt a third blow in as many days after left-back Terrence Mashego withdrew from the squad. Image: @SABC_Sport / Twitter

Bafana Bafana have been dealt a third blow in as many days after left-back Terrence Mashego withdrew from the squad. Image: @SABC_Sport / Twitter

Kaizer Chiefs fans should be rubbing hands and licking lips. One of the best left-backs in Mzansi could make a move to Naturena.

The Cityzens reportedly declared that the 26-year-old from Mamelodi was not for sale.

With the likes of Sifiso Hlanti unfit, Happy Mashiane linked with an exit, and Sibusiso Mabiliso departing last week, it makes full sense for the Glamour Boys to keep chasing Mashego.

According to the latest reports, the Cape club have begun to consider making the sale.

“Cape Town City could be open to the possibility of selling one of their top defenders Terrence Mashego to Kaizer Chiefs, the Siya Crew has learned,” Soccer Laduma reported in their latest edition.

The outlet added to say that Chiefs tabled a bid in June before the club responded by exercising an option on Mashego’s contract.

“Indications from insiders close to City believe that the club would be open to selling Mashego to Chiefs,” the report added.

Would Mashego fit at Amakhosi? Please share your thoughts in the comments section below.