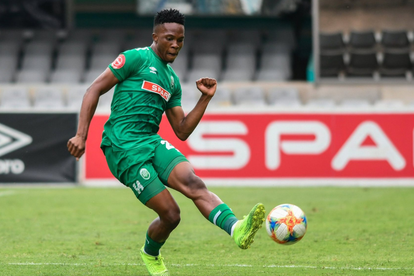 Sibusiso Mabiliso is now a former Kaizer Chiefs player after departing out of the Naturena gate last month.

The 23-year-old from Rustenburg has now revealed why he did not make it as a Glamour Boy.

As The South African website reported in August, the left-back was released to move on with his career.

We had all thought Mabiliso avoided the chop after his name was missing from the club’s exodus of 12 players this window.

However, after spending pre-season with the team and mixing with the eight new players, Mabiliso was suddenly announced as the latest departure.

“Kaizer Chiefs and defender Sbusiso Mabiliso have parted ways after his contract was terminated by mutual consent,” the club said.

“We thank Sbu for his contribution and wish him well for the future,” Amakhosi concluded.

Speaking about the departure since joining AmaZulu, the former Platinum Stars footballer says he was simply given one chance in a Chiefs shirt.

“…I wasn’t given a chance,” Mabiliso said to Soccer Laduma’s leading journalist Masebe Qina in the latest edition.

“I think the only chance that I got was against [Orlando] Pirates and I played well in that game.

“The Pirates game was the only game I started and after that, I didn’t get another chance.

“There was a COVID (outbreak at Chiefs) and I was one of the people who tested positive and I was never given a chance again eventhough I came back two weeks after the outbreak,” he added.