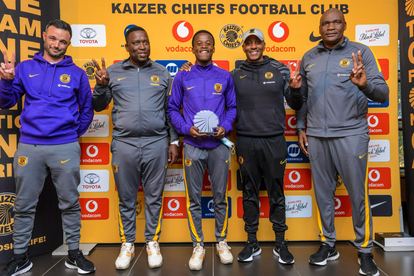 As we’ve heard, Kaizer Chiefs’ rebuild is largely inspired by younger talent. While Amakhosi are busy with younger signings, three kids have raised hands for promotion…

ALSO READ: Orlando Pirates – Why these SEVEN players are expected to be released

WHY THESE KIDS ARE EXPECTED IN THE KAIZER CHIEFS FIRST TEAM

PSL players attract attention with what they show in the DStv Premiership, but for junior and reserve team talent, the DStv Diski Challenge is where you show your first team readiness.

The Soweto giants have thus given a big hint on which players will be at least starting to train with the first team next season.

The club announced the reserve team end-of-season award winners on Monday, and it is a no-brainer that the three players are destined for PSL football.

Mduduzi Shabalala, who already made his first-team debut late last season, was awarded the Top Goalscorer and Player of the Season awards.

Wandile Duba was named the Most Improved Player and Attacking Player of the Season.

So, those are the names we should look out next season: Shabalala, Duba, and, Gumede.

US Open wrap: Nadal crashes out but vacant World No. 1 spot is still down to three players